Firstly, let me get something out-of-the-way.  I like the Pixies… a lot.  I’ve seen the band live once and Black Francis as a solo act twice.  There is nothing quite like watching a fat, sweaty, old, white man screaming out the lyrics to Debaser in Spanish!  Surfer Rosa and Doolittle are unbelievable albums and are my go to albums when I feel like zoning out and just ignoring the outside world.

So anyway, after last week’s disappointing result at the JetBlack 12 Hour at Dargle Farm I have only ridden three times this week.  Wednesday was my first day back on the bike and was a short test ride of my new tubeless tyre set-up at Bruce Ridge.  I didn’t do anything special and didn’t push too hard.  When healthy and motivated I regularly ride between 250-350km a week including at least 100km on the dirt.  But after my DNF at Dargle Farm I’ve been feeling flat and unmotivated.

A lot of people are telling me a DNF is better than a DNS and at least I gave it a go.  I’m not the sort of person that generally gives up; although I am prone to being half-assed.  So after “giving up” last weekend I am now stuck in a rut of “half-ass”.  I didn’t go into the event over-confident; I was still sick but had been riding strong – maybe I set my expectations too high.

This morning I drove out to Mt Stromlo for some dawn riding with good friend and MTB newbie John.  We did the entire of Loop 2 in just over an hour which isn’t a bad effort for someone who can count the amount of times they have ridden on singletrack on one hand.  Although it was freezing cold, foggy and wet I enjoyed the ride and John definitely did judging by his big smile coming down Luge.

Even though I powered up the switchback climbs and rolled down Luge and scored a new PR on Strava; I never felt that moment where I ‘clicked’ with my bike and the trails.  I was close but there was no ‘Flow’. 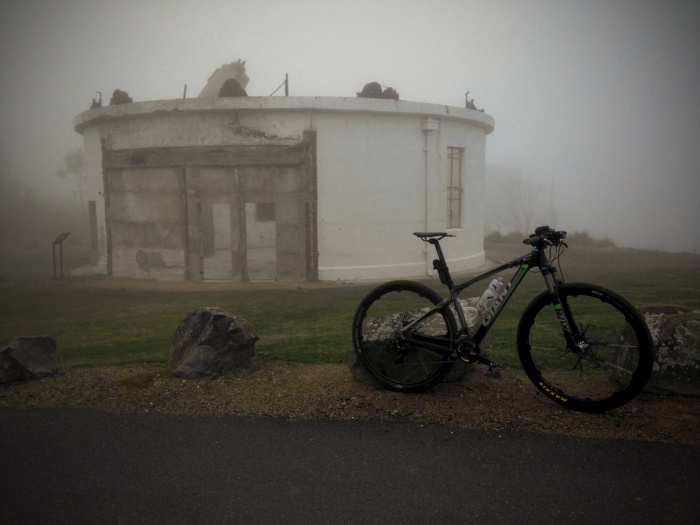 .:Just a little foggy on top of Mt Stromlo:.

After lunch I headed off to Bruce Ridge for some afternoon riding.  Once again I wasn’t feeling very motivated but I geared up and got ready to ride.  I don’t usually ride with my headphones on; but knowing there wasn’t going to be too many people out riding I selected my Pixies playlist and headed off onto the trails.

While Black Francis was screaming at me and Kim Deal rocked out Gigantic I started feeling I was close to ‘clicking’ this ride.  I did some reversals of the normal trails and rode some of the more difficult segments.  But alas I wasn’t quite getting there.  I chose some ordinary lines that caused my back wheel to slip out on several occasions, over cornered some of the switchbacks and managed to head-butt a low branch on Pub Run.

Slowly I rode back to my car when Where Is My Mind? started playing.  I really like this song and can play along to it on both bass guitar and drums.  So when Black Francis sang about his encounter with a particularly bitey fish while snorkelling in the Caribbean I equated the bridge and chorus with my inability to ‘click’ while riding…
“With your feet on the air and your head on the ground
Try this trick and spin it, yeah
Your head will collapse
If there’s nothing in it
And you’ll ask yourself
Where Is My  Flow?